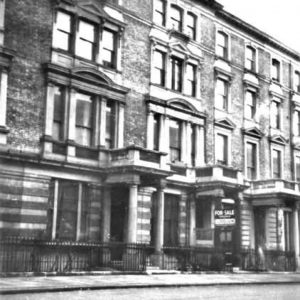 When the Council is finally asked to take over the gardens, the secretary had to get the consent of all the freeholders and leaseholders. To help with this exhausting task, he was supplied with a list of ratepayers and rated occupiers, which can also be compared with the Electoral Register.

Although there were resident freeholders or leaseholders in eleven of the 47 houses, only two in Arundel Gardens and two in Ladbroke Gardens, were occupied by one family or one person. The rest were rooming houses that may well have housed more than the seven to nine people recorded in the Electoral Register.

The photo of houses in Arundel Gardens from 1952 shows how grim the houses looked then.

In 1953 a desperate Mr Greene, the secretary, got an agreement to adopt the Kensington Improvement Act of 1851. This means that the rents, hitherto paid to the Trustees, become rates collected by the council and repaid to the committee as now.

March 1953, the Housing and Town Planning Committee reported that “under the Kensington Improvement Act of 1851, the Metropolis Management Act of 1855 and the London Government Act of 1899, the Royal Borough of Kensington do as from the first day of April 1953, take under their control and management the garden square known as Arundel & Ladbroke Garden Enclosure”